What Does Pink frothy sputum? 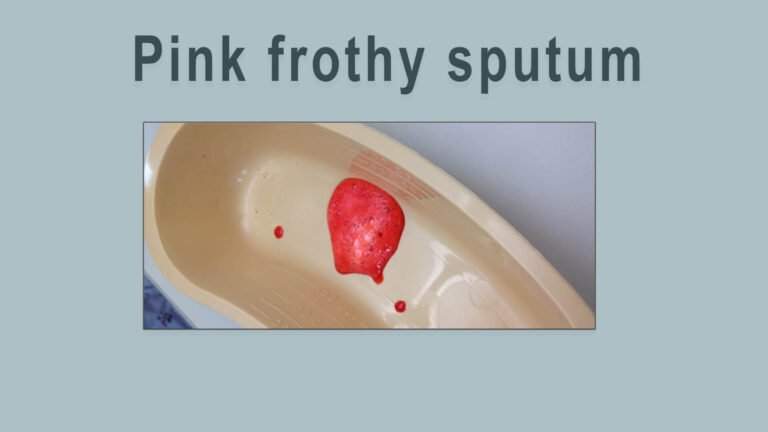 A pink frothy sputum is a mucus that is coughed from the lungs. The reason why it is pink and frothy, is because it has traces of blood in the mucus. Spitting or coughing up a bloody mucus can mean an infection of the lungs and airways, such as bronchitis or pneumonia.

A bloody mucus can also be a symptom of lung cancer. Whenever a bloody mucus is not a symptom a treatable condition, a full lung evaluation is undertaken. Bloody sputum is also known as hemoptysis.

When you cough up a pink frothy sputum (mucus) better known as hemoptysis, it can be a symptom of a serious medical condition. Infections, cancer, and blood vessel problems from within the lungs can be responsible. Anyone with signs of hemoptysis should seek medical advice immediately.

We all know there are many reasons for coughing or spitting up a pink frothy sputum (hemoptysis). The causes for this are:

A disease that causes infections that affects the lungs. If left untreated it kills around 50% of those infected. The usual symptoms of tuberculosis are a chronic cough accompanied by a blood-containing sputum (mucus).

Tuberculosis is an airborne disease and occurs more often in patients already diagnosed with HIV/AIDS and those that smoke. Treatments are vaccinations and the use of multiple antibiotics over a long period of time.

A parasite of the intestines. Larvae live in the small intestine and cause intestinal disease. Left unattended the worms can produce an iron deficiency anemia as they suck blood from the intestinal walls.

Nosebleeds can be alarming, but usually are not anything serious to worry about. During a nosebleed blood flows out of one nostril or both and it can be either a light flow or a heavier flow that can last for a few seconds to a few minutes. The best treatments to stop the flow you can do yourself at home.

Then different ways are to sit down and pinch the nose just above the nostrils for 5-10 minutes, lean forward breathing through the mouth to drain the blood down the nose instead of down the throat, place an ice pack on the bridge of the nose, stay upright as it reduces blood pressure to stop the bleeding.

Nosebleeds are fairly common and shouldn’t seek medical advice unless you’re taking blood thinning medicine, have a clotting disorder, anaemia accompanied by heart palpitations and shortness of breath, the child is under two years of age, the nosebleeds are a regular activity.

Cystic fibrosis is a hereditary disease passed through genes. People with cystic fibrosis witness thick sticky mucus from the lungs, digestive system and other organs

A condition caused by excess fluid in the lungs. It infects numerous air sacs making it hard for the patient to breathe.

It is a life-threatening disease that can cause blood circulation collapse and cardiac arrest. Most cases result in sudden death unless diagnosed early.

Pulmonary edema is where fluid builds up in the tissue and air spaces of the lungs. It can lead to gas exchange problems and cause respiratory failure. The condition is the hearts failure to remove blood freely from the left ventricle. Treatment is undertaken to improve the respiratory function, treat the underlying cause and avoid further damage to the lungs. Pulmonary edema is a very serious condition that can lead to fatal respiratory distress or cardiac arrest.

Mitral Stenosis is a condition that narrows the mitral valve located in the heart. It restricts blood flow through the valve and as a result of this it leads to backup pressure within the heart causing all sorts of problems and symptoms.

A rare autoimmune condition in which the disease attacks the lungs and kidneys, that leads to bleeding due to the lung and kidney failure.

Bronchitis is a non-life threatening condition. It is inflammation of the bronchi (airways) in the lungs. Symptoms include coughing up mucus, wheezing, out of breath, and chest pain. Acute bronchitis is a short virus infection lasting around three weeks and is treatable with simple paracetamol and antibiotics.

Chronic bronchitis is a long term infection that lasts three months or more. Tobacco products are the most common cause and treatments include vaccinations, rehabilitation, steroids and not to mention the quitting of tobacco products.

When seeking medical advice you may undergo one or more of the following tests:

Treatment depends on the underlying cause and how much you are bleeding. Mild hemoptysis doesn’t usually need immediate treatment, but should always be investigated thoroughly to rule out a life threatening condition. If untreated or the condition is big, death can occur as a result. This is usually from gas exchange in the lungs being all mixed up resulting in the body have an increase in carbon dioxide and a decrease in oxygen. Most cases of hemoptysis are treated with antibiotics. For more severe cases treatment is decided upon the symptoms and causes.